Mt. Olympus. The spiritual core of the Hellenic world!

Olympus, the highest Greek mountain, the residence of the twelve ancient gods, was the first area which was declared as a National Park.

Mount Olympus is located on the border of Macedonia and Thessaly between the prefectures of Pieria and Larissa. The highest point of Mount Olympus, Mytikas, is located 263 km from Athens and 78 km from Thessaloniki as the crow flies and 18 km from the coast of Pieria and 24 km from Katerini.

Olympus expands over approximately 500 km2 and covers an essentially circular area with a width of approximately 25 km and a circumference of 80 km. The Olympus National Park covers an area of 238,411,000 m2 with the heart being 40 million m2.

Because of the fact that it rises from zero and the Aegean Sea to 3000m in only a few kilometers, the mountain of the gods holds a very special microclimate giving unique effects to the mountain’s flora. This, along with the place’s natural beauty and historical and mythological interest makes it a very attractive destination to the point of being a “must” for every visitor in the area and Greece in general. 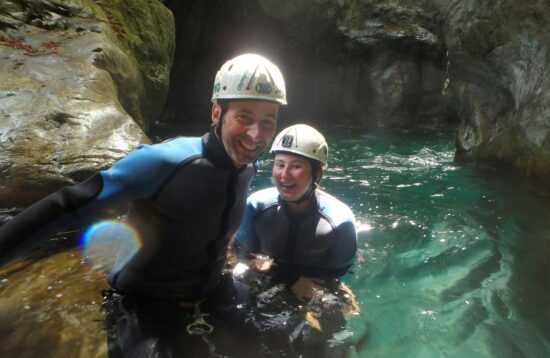 Canyoning and hiking in the Enipeas gorge – Mt. Olympus.

Canyoning & Hiking in the Enipeas on Mt. Olympus. This is a very well balanced combination of hiking in an extremely beautiful terrain and canyoning in the second half of the Enipeas I section , involving the two wonderful abseils, as…

Explore
We use cookies to ensure that we give you the best experience on our website. If you continue to use this site we will assume that you are happy with it.Ok